It started with a phone call and it quickly deteriorated from there. He left three messages before I eventually called him back. All of the messages were some variation of “Hey Erin, it’s Trainer Bro.* Just calling to let you know that with your new gym membership you get a free training session. Call me back so we can get started!” (* protecting the name of the not-so innocent and very annoying.)

Truthfully, I didn’t want to get started. Hence why I wasn’t returning his calls. When it comes to my gym time, it’s MY gym time. I don’t want anyone to talk to me, look at me, breathe near me… whatever, you get it.

Then, one fateful Wednesday afternoon, I was in the middle of a HIIT on the elliptical when he called again. Again, I let it go to voicemail, then called him back once I was safely out of the facility.

He went through his well-rehearsed script, the one I’d heard three times before, and really didn’t care to hear again. “When will you be in the gym next?” He asked me.

“Well, I was actually just there,” I said a little sheepishly.

The line was silent for a moment. “You were just there and didn’t come say hi to me?”

“Sorry,” I said with an eye roll. We weren’t friends so SORRY NOT SORRY #YOLO.

“Oh it’s okay. If you want, you can make it up to me by coming in for a session Friday afternoon,” he said in a playful-flirty tone.

Make it up to you? Are you kidding me? *insert Erin cringing here.*

“Great! How about 4 PM?” he asked. Before I could even respond, he said “unless you’re going to Happy Hour with the girls.”

Happy Hour with the girls. Seriously? Excuse me while I throw-up in the corner over here.

There are three things I can’t stand (okay, more than three things, but only three things that apply here): 1.) Guys who try to flirt or charm their way through a business transaction, 2.) Guys who undermine me/women in matters of the gym/athletics, and 3.) Guys who say things like “Happy Hour with the girls.”

It should be noted that I called the gym the next day asking for a.) an earlier training session and b.) a different trainer, but apparently Trainer Bro and I were gonna be stuck together for an entire, very unfortunate hour.

I met him at the gym a few days later, armed with my water bottle, a towel and a lot of skepticism. He asked me about my fitness goals, my eating habits, if I’d ever belonged to a gym before (“Yes, my college’s fitness center,” I replied. “Oh, so just a rec center,” he said. “Nope, it was a pretty legit gym” I said, narrowing my eyes. Thanks for undermining me again, Broseph.)

Then came the actual fitness part of the session, which was a brutal awakening to the fact that I am indeed out of shape. It was unnerving having Trainer Bro watching every one of my moves, especially when I was doing squats, but I kept reminding myself that he was just doing his job. Whatever.

Thankfully there weren’t too many flirty comments or looks, and when there was a smooth comment, I laughed it off because you don’t want to disagree with the guy who’s choosing how much weight you use during your bicep curls. In other words, things were going sort of well.

Then he brought me to the chest press, and it was there that he redeemed himself as the ULTIMATE bro-sexist trainer. He told me about how I should only rest for 30-45 seconds in between reps because it could lead to me bulking up. “Women who have bulky chest muscles look kind of weird, and you won’t want that,” Bro Trainer said.

I stared at him for a moment. Didn’t he realize who he was training? Didn’t he realize that a woman was sitting right in front of him? Did he not hear me when I said my one goal is to get stronger? Maybe I don’t care about bulking up. Maybe I simply want to get stronger, and if “big chest muscles” come with that, then that’s fabulous. Who is he to tell me what I do and don’t want? Thankfully there were only 15 minutes left.

Bro Trainer then brought me over to do leg extensions, where my leg muscles demonstrated just how exhausted they were by rattling against the machine.

“There was a skinny guy in here before you, and when he sat down to do this exercise, his legs were shaking even more than yours,” Bro Trainer said. “It was pretty funny.”

I stopped doing the exercise. “So…just to clarify… you’re going to make fun of me this way to your other clients?” I asked.

Bro Trainer shrugged. “It’s not like you know who I’m talking about.”

With the last exercise completed, you’d think that the session would be over right? WRONG BECAUSE THAT’D BE TOO EASY.

No, he brought me over to his desk and ran through all the different training programs and prices that the fitness center offered. The cheapest one? $40/week, on TOP of my monthly gym membership fee, AND a training initiation fee of one hundred dolla$.

I politely explained that $40 a week doesn’t fit into my already tight budget, but that maybe in the future I’d reach out to him if interested. Instead of taking no for an answer, he proceeded to deconstruct my entire budget. Even though I told him that I eat healthy already, he told me that “probably wasn’t true,” and that he “could finesse it for me” AND “save me money in the process.” “You can buy bulk chicken, eggs, and rice with my diet plan. It’ll save you so much money,” he said.

Um, sorry, but that diet sounds like the worst. I like all three of those things, but I need variety. Plus, it doesn’t get much healthier than kale salads and quinoa, both of which are foods I eat on a regular basis. I tried my best to not look offended and pissed off, but my mother’s always said I have a terrible poker face so… (Hi, Mom.)

Once he finished criticizing my financial habits, he then announced that he’d found the $40 necessary to pay for a trainer.

“Actually, I’m even less interested than before,” I said as I rose from my chair. “And I actually really need to get going, but thank you for your time.” I’d like to say that I strode confidently out the door, but my legs were Jello-y so it was more like a slow, confident waddle to the parking lot.

It should be noted that I believe there are a lot of really good personal trainers out there. Trainers who simply want to help others get stronger without being hungry for commission.

I’m just not interested in training with a guy who makes sexist comments about strong women and makes fun of people who aren’t as strong as he is. I’m not interested in being judged or belittled by a guy who didn’t train properly and then ended up injured, thus cutting his college baseball career short.

And I’m sure as hell not interested in being trained by a guy who says things like “Happy Hour with the girls.” Oh God, I’m getting nauseous all over again. 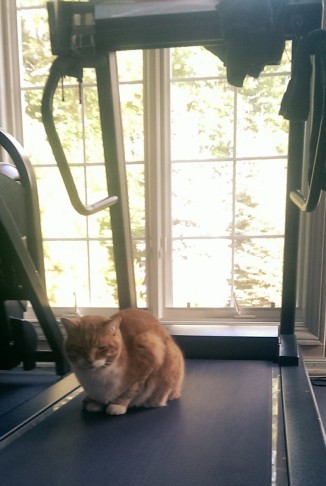 Treadmillz are for sleepz, yo!

So for now, here’s to working out solo and avoiding Bro Trainer whenever I go back to the gym. Besides, who needs a personal trainer when I have Ollie as my fitness inspiration?

Now if you’ll excuse me, it’s Saturday and I’m training for a marathon… a Gilmore Girls marathon.