Let me set the scene, readers. It was a Saturday night. I was in red heels and a (fake) leather jacket, pushing dollar 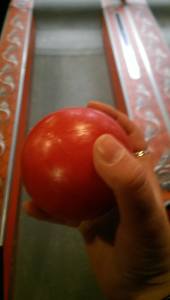 Boys are whatever, skee-ball is forever.

after dollar into the skee-ball machine (like the three of you are surprised by this, HA), and enjoying  a Bud Light, when he came up and talked to me.

We’ll call him Nice Guy. Nice Guy and I talked for a while. The conversation was good, he wore a button up, and he wasn’t trying to get me white girl wasted, so I felt it was off to a good start. He told me that he’s 29 and already has his masters degree, which made me feel like I was still in kindergarten, being only 22 and having just finished my undergrad. It was cool, though. I tried to act mature, which is difficult to do when you’re obsessively playing an arcade game and drinking dishwater beer.

Like many of my semi-positive encounters with the male species, though, I knew it was too good to be true. And I was right. Because then I met his friends and it was all downhill from there. Let me tell ya, readers, a guy isn’t ALWAYS the company he keeps, but sometimes it’s just enough to sabotage his attempts to meet respectable ladies (which I like to think I am, but maybe you all think otherwise…WHATEVER).

First off, one of them was in a New York Yankee hat (we’ll call him Yankee Hat), and I am a Boston Red Sox fan, so we were already starting off on the wrong foot. He was a bit rude and he’d try to say something to prove a point, to which each time I’d counter his statement by saying, “That may be, but you’re a Yankee fan, so I don’t believe anything you’re saying.” or “Yeah, but the Yankee hat is preventing you from seeing the big picture.” I said it enough times that he finally and drunkenly whispered in my ear, “Dude, I’m not a Yankee fan, I just need the hat to cover my bald spot.”

I wasn’t convinced so I kept saying it anyway.

He then proceeded to ask me how long Nice Guy and I had been dating because he was super immature and wanted to make us uncomfortable and because he’s a terrible wing-man. A little later, Yankee Hat decided to strike up yet another conversation with me:

Me: I don’t know, I think I’m pretty average.

I’m trying to count the number of brain cells that died off during that conversation, and I’m glad my self-esteem doesn’t thrive on a balding Yankee Fan’s ability to give back-handed compliments to The Ladiez.

Next friend was Asshole-in-the-Flannel (AITF for short). Not that wearing flannel makes someone a jerk (I wear flannel all the time and many of my good, upstanding friends do!) but he had the collar popped like a preppy frat boy wearing a polo, so you get the idea. But it’s not so much what he was wearing that made him a jerk, but what he SAID. Because as I was talking to Nice Guy, I saw AITF mouth to him “BANG HER.”

Like I wasn’t standing RIGHT THERE. So I just looked at him and asked, “Did you just say you want him to ‘bang me’?”

Clearly surprised that I saw him say that, he goes, “What, of course not…”

As you all know, though, I THRIVE on making situations awkward, so I pressed further and said as innocently as I could, “What does that mean though? To bang someone? I don’t get it…”

Then I turned to Nice Guy and flat out told him, “If you think that’s happening tonight, keep dreaming.”

He quickly said that’s not what he was hoping for, he just wanted to meet new people. I’m sure he was telling the truth, but his friends had pretty much ruined any chance he had. Some of my friends said that’s not fair because Nice Guy was really NICE, and that his friends aren’t necessarily a reflection of him.

This is true, and though it’s difficult to make friends in this big city, it is possible to find some respectable men to be friends with, I’m sure. If his friends keep following their vulgar path, they will prevent him from meeting nice respectful women. Sure Nice Guy was nice, but his friends and their repulsive attitudes pretty much overshadowed anything nice about him. What was even more disappointing is that these guys were about 30 too, and so you’d think that they’d have it all together by now.

But if you’re 29 and act like you haven’t left your immature college days behind you, and you still DON’T understand how to respect a woman, then I want nothing to do with you. If you’re still using the phrase “BANG HER” and you’re hiding a bald spot with a baseball cap, you are a contradiction that I don’t want any part of. And sadly, if you’re a nice guy but you’re friends with guys like this, I don’t think it’s going to work out.

I went home that night and felt so incredibly sad because I’d been excited to graduate from college and hopefully find guys to date who are more mature, not vulgar. But then I met immature 29 year old men and that hope went out the window.

Don’t get me wrong readers. I have met respectful men of all ages, but they seem to be few and far in between these days. Even though I’m single and would like to date, my threshold for BS is low, and I won’t settle.

So just to recap, if a guy approaches me and thinks the way to win me over is a few vulgar phrases and a traitorous baseball hat?

I think I’ll just stick with the skee-ball machine.

One thought on “Ugh: A Story About Immature Dudes”